Some interesting facts pertaining to the 1990s that highlight the important role played by social security measures in Europe and the manner in which the benefits are utilized or misused are given in this article. The relevant snippets are also made available as image files.

The dispensary conditions are not conducive and are very unhygienic.

Government was not ready to spend on hospitals and medicine, as they were “not productive”.

Financially strapped governments had neglected health care and this resulted in unprecedented crisis.

Health situation was so bad in much of Eastern Europe that it was beginning to affect the ability of some countries to compete effectively on the world market.

Bribe in single case is much more than salary.

Doctors must cope with run-down equipment.

Attempts were made to change the medical system from communist model. But, it was basically free, in the communist era. One had only to bribe which was not more than a box of chocolates or flowers.

The director of the hospital threatened that he would close it, as there was no essential facility to treat patients.

Doctors who treat patients privately get them operated in State hospitals and do not pay for the service and equipment.

Entitlement of the people to wide range of medical services that was available in the communist era had begun to diminish and got eroded.

Social Security costs became enormous and the E.U. government exchequers were bleeding, because of unemployment benefits.

The reason was that because of the high economic growth and the generous social security benefits, the West European workers began to imagine that their services were costlier and starting demanding very heavy amount as wages.

Employers and Trade Unions could not agree on terms of revival.

Foreign workers are seen as blocking jobs for indigenous workers.

High taxation affects the workers and they do not have access to common luxuries.

In smaller economies people set up their own businesses.

“Germany’s entry into the United States system of hire and fire” is described “as socially obscene”. 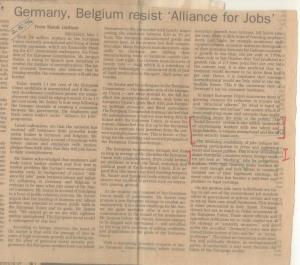 One has to see to believe it.

This, in a country where the general level of honesty is admirable, as could be from one incident cited by Mr. Rahul Singh in the Outlook 27.08.2001.

Filed under For Trainees, International