These cases deal with criminal procedure. But, they have some relevance for general administration side also.
I.

Mr.Sarbjeet was picked up by the police, detained for several days and finally gunned down near the Indo-Pak border. It was, later on, found that the deceased had nothing to do with terrorist activities and was completely innocent. The Supreme Court has in this case ordered the CBI to conduct an inquiry.

A British man who has spent nearly 15 years in jail for the rape of a student nurse was cleared and freed on Friday after an appeal court ruled that the crime “almost certainly never happened at all”. Roy Burnett (56), a gardener from Kent, was jailed for life in 1986 after a jury accepted evidence from the 20 year old nurse that she had been raped and seriously assaulted. Burnett consistently said he was innocent, but had no grounds for an appeal until 1998 when the same woman made a false complaint of rape to Devon police. The police were informed and Burnett’s case was re-opened. But for the action of the police he “might have continued to be incarcerated for many years yet”, the appeal judge said. –DPA.

On a Sunday all the inmates of the house went to the church leaving a maidservant alone in the house. When they returned, they found that some precious jewellery was missing from the house. The maidservant was prosecuted for theft and convicted on the ground that she alone had exclusive opportunity.

-Cited in Batuklal’s Law of Evidence.

“In another case a maid servant was tried for murder of her mistress. On the day of the murder the accused and the deceased were in the house and all the doors and windows were shut from inside. The maidservant was convicted for the murder and sentenced to death on the ground that she alone had the exclusive opportunity to commit the murder. The maidservant was executed but later truth came to the light from the confession made by the real offenders. They said that they entered the house of the deceased by putting a wooden plank from the window of the adjacent house to the window of the deceased house, across the street, which was narrow. They committed the murder and went back the same way without leaving any clue.”

In Pandiammal case, her husband was fixed for the murder of Pandiammal and was tried in the court of law. When the punishment was to be inflicted, his wife Pandiammal herself turned up in the court and said that she had not been murdered by anybody but had gone to Kerala because of marital discord and came back after hearing from someone that her husband was in jail for having murdered her. It later turned out that the husband of Pandiammal had been tortured by the Police and had been made to confess that he had indeed murdered his wife. The police was investigating into a death of a woman whose decomposed body was found near the village. People said that it might be Pandiammal as she was not seen for a few days and that there would always be quarrel between her and her husband. So, the Police fixed her husband. Now, when the facts were out, the police was wondering who the murdered woman was and who had killed her.

But for the torture method, the Police would at least have gone in search of the real killer and the real victim. 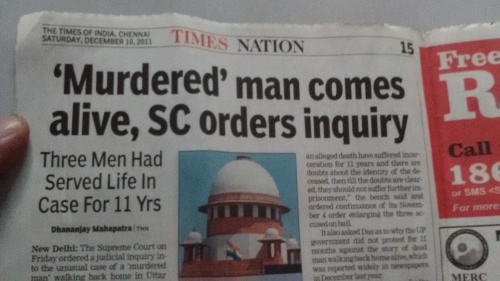