During his speech at the time of presenting the budget, Hon’ble Finance Minister had gone on record having said that both the EPF and ESI had kept their beneficiaries as “hostages, rather than clients”.

The ESIC is an important social security organisation to provide the essential security net to the workforce. There had been many illustrious officers right from inception who had toiled for the proper administration of the ESI Scheme. Voluminous books on the ESI Act authored by various legal luminaries would testify to the manner in which the officers of the organisation had striven hard to enforce the Scheme for the public good and to prevent various malpractices by the employers, beneficiaries and the officials of the ESI Corporation.

The financial management of the ESIC had been appreciated by the Economic Times also, as dealt with in detail in various other posts. This department is doing well but it could, definitely, have done better. It could have scaled newer heights in social security.

But, what is remarkable is that this organisation is doing well, so far, in spite of unlawful interference by many politicians in power who aligned themselves with corrupt bureaucrats at various levels of the organisation, to sabotage the organisation from within. Instead of monitoring whether this autonomous body was administered as per rules to achieve its avowed goal, as was done by many political leaders in power, some politicians who came to power, abetted corruption in various spheres by interfering in the affairs of the organisation, for mala fide reasons. They wanted to play their negative role, even in the matter of transfers and postings. And the damage they had caused, thus, was immense. They used to support the corrupt officers because it was only they who went to those politicians for ‘protection’.

But, now, things are once again drifting towards dark age. The present Finance Minister had chosen to paint the organisation black by accusing the ESIC as a department that held its beneficiaries as ‘hostages’. Moreover, as a consequential measure and as promised by the Minister of Finance in the Budget itself, efforts were taken by the bureaucrats in the PMO, in an unseemly hurry, to get a resolution passed by the Apex Body of the ESIC to amend the Sec.44 of the ESI Act, 1948 to tinker with the structure of this mammoth social security network of the nation. The intention was to allow the private players to enter the arena of social security who would reap a lot of profit and share it with the politicians in power in the name of donation to political parties and otherwise.

Dr. B. R. Ambedkar had said insurance sector must be only with the Government and  that the government would be able to generate money through it for various public purposes without borrowing otherwise.“Dr. Ambedkar recognises the importance of insurance in providing the state with “the resources necessary for financing its economic planning, in the absence of which it would have to resort to borrowing from the money market at high rates of interest” and proposes the nationalisation of insurance.

He categorically stated: “State socialism is essential for the rapid industrialisation of India. Private enterprise cannot do it and if it did, it would produce those inequalities of wealth which private capitalism has produced in Europe and which should be a warning to Indians.” (Venkatesh Athreya – Frontline – 02.08.2002).

Disclaimer of the Ministry of Labour

As the accusation of the Minister of Finance that the ESIC was holding its beneficiaries as ‘hostages’ was contrary to the reality, it was considered necessary to ascertain the basis on which the Minister had included such a word in his Budget speech.

The application and the replies 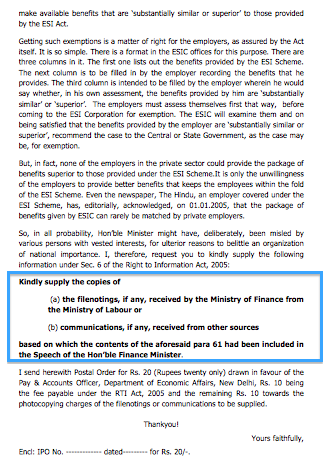 Copy of the Reply dated 02.06.2015 sent by the SS-I Division of the Ministry of Labour & Employment:

Copy of the Reply dated 26.05.2005 sent by the SS-II Division of the Ministry of Labour & Employment:

ESIC, made to stoop to be conquered

The issue, now, is  how the Minister of Finance included the questionable and depreciative word ‘hostages’ in his Budget speech, delivered before the august body, the Parliament  of India, without keeping, beforehand, any documentary evidence in the form of note from the concerned Ministry of Labour & Employment or from “other” sources. Circumstantial evidence indicates that a consultant working for the caucus of the rich had been using the term ‘hostages’ in his articles written against the ESIC and the EPFO for about two years.

And, the persons-in-power had lent their ears to such a broker and incorporated that term to deride the two important social security organisations of India while presenting the budget on 28.02.2015. These rulers did not think it necessary to check back the veracity of such an allegation, and ascertain the facts from the departments under their own control, in spite of the fact that these two social security schemes were and are the backbone of the nation’s economy preventing various kinds of social chaos.

What becomes clear is that the these power-brokers, who want to belittle the ESIC and the EPFO, wield so enormous a power that they could personally influence the Minister of Finance and plant their choice of words to deprecate these two organisations, through the Minister himself in the Budget speech itself. And, the minister was so obliging and accommodative !

The issue did not stop with the budget on 28.04.2015 only. The same rulers pressured the Director General to place before the meeting of the Apex Body of the ESIC a proposal  to amend Sec. 44 of the ESI Act, 1948, to enable the private players to enter the social insurance sector. It is strange that this proposal for amendment of Sec.44 did not come from the field after proper field survey. It did not emanate from the need of the workforce. The proposal to amend Sec. 44 of the Act came from the top, and it was intended to satisfy the greed of the rich and powerful. Fortunately, the employees’ representatives had been alert and had opposed the proposal so fiercely during the meeting held on 07.04.2015 that the matter was deferred. The persons-in-power had, thus, demonstrated on 28.02.2015 and 07.04.2015 their penchant to make the ESIC to stoop so that it conquered by the rich and the powerful.

Social Security safe only when in Government hands

ESI Act, 1948 came into existence even before the Constitution came into existence in 1950. Art. 41 of the Constitution was framed by the Constituent Assembly keeping in view the fact that the ESI Act, 1948 was already existing. The noble scheme was conceived of with the intention of managing it through the government itself to attain the goal of social security for the masses. The Working Group on Social Security for the Tenth Five Year Plan (2002-2007) wanted expansion of the Scheme. The meeting of this Working Group said, as under in its Minutes dated 03.07.2001: “There is need to take new initiatives to extend the spread and reach of the existing social security schemes being administered by the Employees’ State Insurance Corporation and Employees’ Provident Fund Organisation.“

But, the scheme is, now, being given a bad name by the rulers, with the mala fide intention of enabling the private players to enter the insurance field with (huge) profit motive. An organisation meant for service by the Government is converted to become a profit and loss venture for private players.

The ESI Scheme can be run successfully and must be run only by the government  but without any scope for corruption. It is the politicians in power who are mainly responsible for the non-performance of the organisation in any sector. They must rise up to the occasion and see that the Scheme is run properly. There is no public interest in freeing the social security field from State control and allow private players to play with the lives of the people.

The Director General, ESI Corporation also did not send any report to the Ministry of Labour & Employment regarding the allegation that the ESIC was holding its beneficiaries as ‘hostages’ as reported by the Finance Minister in his budget speech. The Ministry of Labour has confirmed that it did not receive any such information from any other source. (Vide MOL&E letter No. RTI / 45 / 2015 – SS-I dated 02.06.2015). This letter is added to the article today. 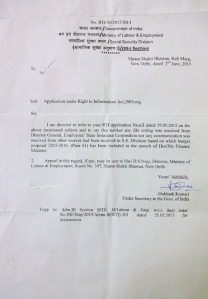 The reply from the Ministry of Finance that they do not have any information about the source from which the word ‘hostages’ was chosen to be used in the budget speech, while referring to the state of beneficiaries of the ESI Corporation.

5 responses to “Hostages! Accusation against ESIC & EPFO, without documents !!”