Synopsis: Is there a grand design behind the desperate action of the ESI authorities to facilitate a political bigwig to take over ESIC properties as running medical colleges? Why are they hell-bent on continuing with the medical colleges when they know that their financial position would nose dive very seriously in the year 2016-17, if they continue to run them? Why are the ESIC authorities moving the Supreme Court and High Court New Delhi so desperately to get the required certificate from the Medical Council of India which did not certify the fitness of these colleges for the year 2015-16?  Are the ESIC authorities going to protect the property of the Indian labour force or are they playing active role in the conspiracy? Do the authorities have any right to keep people in the dark, by not answering legally valid questions? The article is intended to find answers.

The ESI Corporation started establishing medical colleges and are running them from the year 2010 onwards in (1) K.K. Nagar, Chennai, Tamilnadu, (2) Rajaji Nagar, Bengaluru, Karnataka (3) Joka, Kolkata, West Bengal, (4), Gulbarga, Karnataka and (5) Dental College, Rohini, Delhi. It was later realised by the ESIC, in the year 2014,  that it had ‘no core competency to run medical colleges’. A Sub-Committee was, therefore, constituted to examine the issues involved. The Secretary of the Ministry of Labour & Employment, Government of India had been the Chairman of that Sub-Committee on Medical Services and Medical Education. The Director General of the ESI Corporation had been one of the Members along with the Financial Commissioner of the ESI Corporation.  And, that Committee had given report on 13.05.2014 stating, among many, that based on current projections, the budget of the ESIC would likely be negative in the year 2016-17. 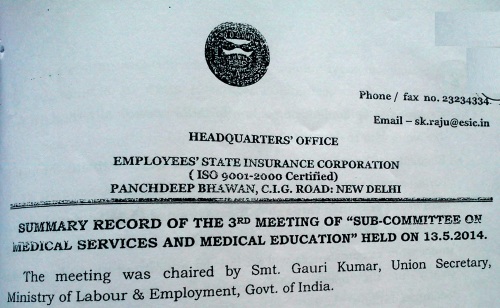 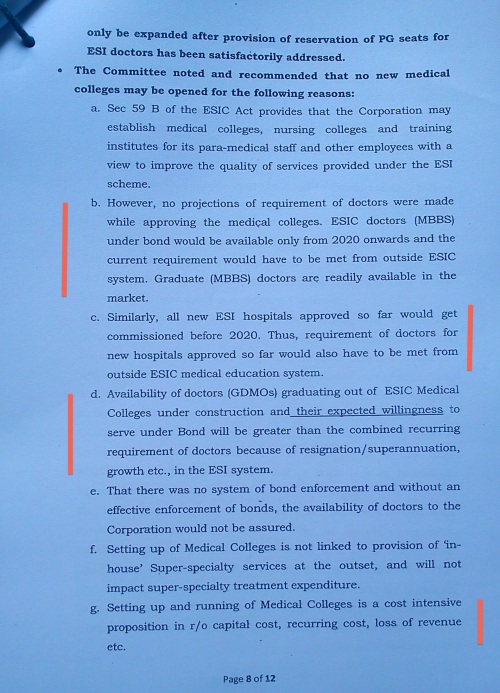 The Apex decision-making body, the ESI Corporation had, thereafter, taken a formal decision, on 04.12.2014, that the “ESIC should exit the field of medical education entirely” as that was “not the core function of the organization”, as could be seen from the Memo dated 05.01.2015 of the ESIC.

The ESIC had also decided to ease itself out of the situation in a phased manner by running the colleges only for the purpose of enabling the already-admitted students to continue and complete their studies or to close all the colleges, at once, by apportioning the admitted students among other medical institutions.

They decided, rightly, to quit “earlier”

The memo revealed that the ESI Corporation had, as an Apex Body, taken a considered decision to quit medical education and to close down the medical institutions in a phased manner or to close them down immediately by apportioning the existing students among other medical colleges of the respective state governments, “whichever is earlier”.

While this was the decision taken, rightly, by the Apex body on 04.12.2014 and communicated on 05.01.2015, the ESIC authorities had, in their subsequent Memo. dated 18.03.2015, communicated a diametrically opposite administrative decision (and that too, without placing that issue before the aforesaid Apex Body) to admit students for MBBS/BDS/PG courses in all the aforesaid four institutions for the year 2015-16.

When the ESIC had confessed earlier, in categorical and clear terms, that it did not have the core competency to run the medical colleges and that running medical colleges was not its core activity, it cannot, later, take an arbitrary and unjustified decision to admit students for one more batch and aggravate, thereby, the problems of both the organization and the prospective students.

The contents of the Memo dated 18.03.2015 were really puzzling. And, rumours were afloat,  that the reason for the decision communicated by the ESI authorities on 18.03.2015 to reverse the earlier decision dated 05.01.2015 was to facilitate handing over the four medical colleges at the four metros with the entire infrastructure to some, already-identified-political-bigwig, at a later date, as a running institution. The rumour gained credibility as the decision communicated on 18.03.2015 had been taken without recording convincing reasons anywhere to prove how the issues raised by the Sub-Committee were wrong or, at least, surmountable. Was it not the duty of the bureaucrats to record reason rebutting all the points raised by the Sub-Committee that led to the decision to quit medical education?

The relevant questions of a citizen

A citizen had, therefore, decided to ascertain for himself the facts relevant to the issue. He wanted to know whether the ESIC, which had taken decision to admit students for the next year would continue to run the medical colleges “forever” or would hand over those colleges, at a later date, to  someone through some arrangements, as the authorities have already been demonstrating considerable enthusiasm (over-enthusiasm, in fact) in PPP very often.

Silence of the CPIO

But, the CPIO of the Headquarters Office of the ESI Corporation maintains total silence and does not respond to the application. He is violating the provisions of law, in the belief that the penal provisions of the RTI Act would not be enforced.

But, the public has the right to draw adverse inference when a public authority does not discharge his legal duty to respond and maintains total silence.

But, their unlawful non-response lends credence to the rumours that they are abetting the process of handing over the four important structures in the four metros at Delhi, Bengaluru, Chennai and Kolkata, really, to the private bigwig at a not-so-distant future, as running institutions.

The  latest news is that the ESIC authorities have gone to Supreme Court and then to the High Court of New Delhi seeking direction to the Medical Council of India to reconsider its earlier decision not to recommend issuing Letter of Permission to run the ESIC Medical Colleges. Why are the authorities so desperate to run the ESIC medical colleges in spite of clear cut red-signals seen by them ahead? Why are they so desperate to consciously go the wrong way, which, they are aware, is wrong?

Is this desperation of the ESIC authorities in the interest of the insured persons?