Sinister report of the Second National Commission on Labour: Exposed by the Dissent Note !

“The truth is that the State is a conspiracy designed …… to exploit, ……. its citizens”

What Tolstoy said becomes totally true when we see the conspiratorial manner in which the Labour Code is being brought about. The intended Labour Code is, really, going to be a tool of oppression. It is intended to convert the entire labour force into slave labour. The Ministry of Labour & Employment is indulging in false propaganda through its powerpoint presentation on this issue. The Ministry is hiding many a truth behind the Code. When the Ministry wants to undo the ESI and EPF facilities, it is projecting the noble features of these schemes, as if they are going to be introduced only through the Labour Code. The Ministry which does not come forward to make public the legislative policy behind the Labour Code does not hesitate to cheat the people through the Power Point Presentations which contain a lot of half-truths and misleading statements.

The officials who are held hostages by the power-brokers, are doing their biddings to undo the welfare schemes. But, they hoodwink the people to believe in the contents of Labour Code which is,actually,  intended to benefit the middlemen at the cost of the working population.

The rulers proclaim from the roof-tops that they are  bringing out this Labour Code as per the recommendations of the Second Labour Commission. But, the fact is that the motive of that Commission was sinister.

That fact is established from the very Dissent Note submitted very honestly by the Member Mr. C.K. Saji Narayanan on 21.05.2002.

A few quotes are given below. The complete text of the Dissent Note can be had by clicking on the following link: 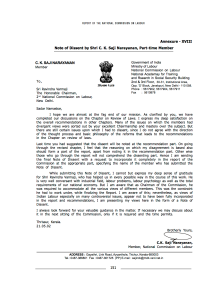 Mr. Saji Narayanan has done his work honestly, fearlessly, with conscience and without fear. He has rendered his service to humanity right.

It is the duty of every conscientious citizen of the nation to expose the ulterior motive behind the proposed Labour Code and enlighten the masses and help them get their rightful benefits as workforce restored.

People do have the right to demand from those who defend the Labour Code to give point by point reply to the observations of Mr. Saji Narayanan.